All advance tickets are SOLD OUT

One actor.
One audience member.
One blind date.

You’re invited to fall in love with a stranger in this thrilling, voyeuristic, blind date experiment.

At the Red Lion Room

The show starts in the lobby, where the very sexy, French clown “Mimi” mingles & interacts with the crowd, looking for a gentleman who’s willing to go on a romantic adventure in front of the audience.

What happens once our ‘audience-member-turned-romantic-Hero’ arrives on stage is anyone’s guess, as this improvised roller-coaster-ride plumbs the depths, and scales the heights of just how moving, hilarious, and complicated it can be when two humans try to connect. Every night is different, and audiences often see Blind Date multiple times.

Having just celebrated its 10th anniversary, with its 800th performance at The Centaur Theatre in Montreal, Blind Date shows no signs of slowing down.

Blind Date’s popularity and longevity are not only attributed to the world-class improv talents of the cast, but more importantly, to the care and respect with which the audience volunteer is treated. Always kind, never mean-spirited, Blind Date has been called, “surprisingly moving and laugh-out-loud funny.”

This award-winning production caught the attention of Broadway Producer, Kevin McCollum (RENT, Avenue Q, Hand to God), who brought Blind Date to New York, to play off-Broadway in 2010. Since then, Blind Date has played sold out houses across Canada, the US, and in London. A sweet and surprising production, Blind Date has, in recent years, seen spin-off productions for queer audiences – developed with Evalyn Parry at Buddies in Bad Times Theatre in Toronto, Canada –  as well as having been licensed to the prestigious Norwegian improv company, Det Andre Teatret, in Oslo. 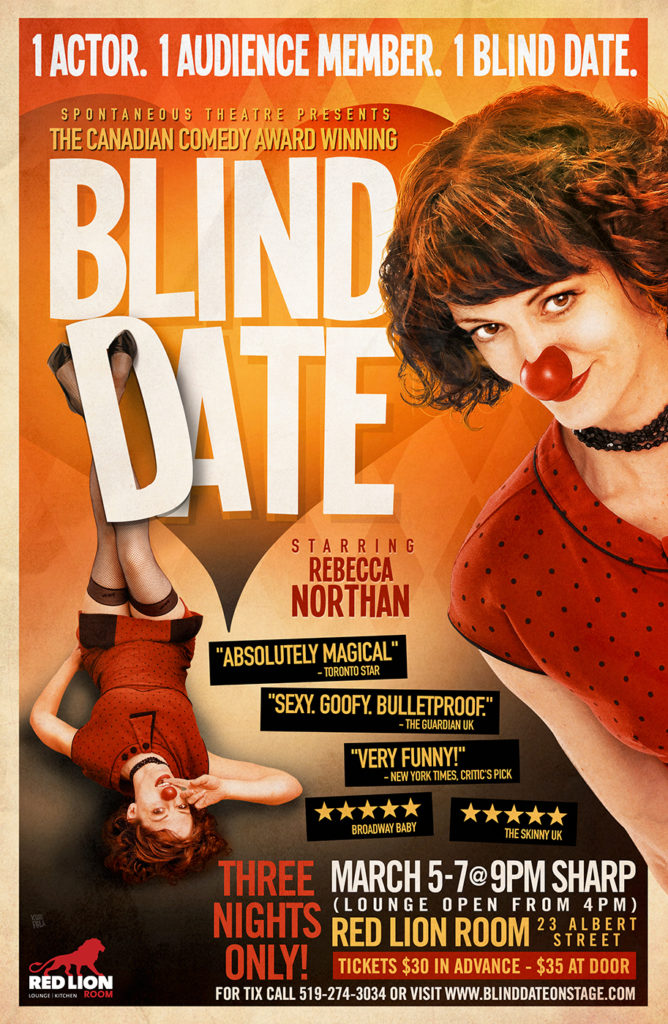 “A flight of theatrical fancy that is absolutely magical”

“Irresistible. Cheeky. Charming. Couples therapy should be so much fun.”

“A must-see performance…the theatrical equivalent of walking a tightrope”

“It’s a perfect marriage of theatre and comedy, and a wonderful international calling card.”

For booking or licensing inquires, or to be added to our mailing list, drop us a line.